Ashes: Rise Of The Phoenixborn tournament at GenCon 2015 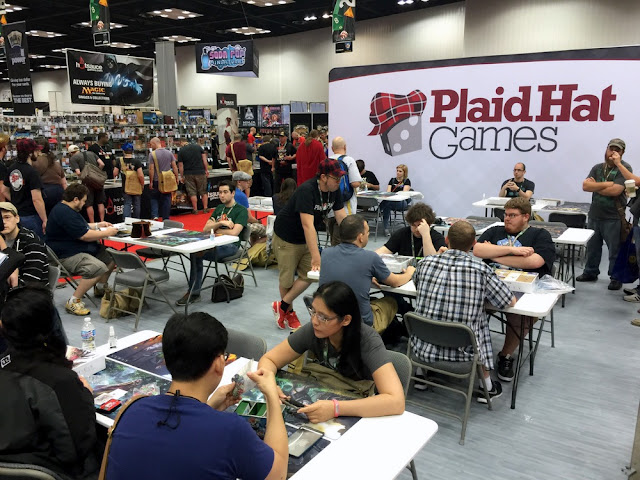 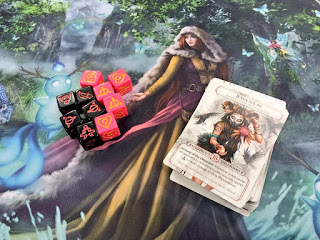 I had no intention on spending $50 on a card game I had never heard of. I have way, way too many card games already. I have too many because I love card games. Big ones, little ones, complicated ones, simple ones. I don’t care. If it’s an elegant design, I’m interested. I love Skat, a German game for three that’s played with just 32 cards culled from a standard deck just as much as I love the old Star Wars CCG, which has almost 2,000 unique cards. I even have a number of card games that sure look interesting, but I’ve never played them. Walking into GenCon 2015, I certainly didn’t think that there was yet another brand new card game out there that was going to take my money. Guess what? I now own one more card game.

The box art was the first thing. It's bold, elegant and attractive. That's why I got suckered in just like a number of other gamers who couldn't help but mention how good the art is in Ashes: Rise of the Phoenixborn. More games should be this colorful, this pretty, this diverse (seriously: there are five female Phoenixborn and only two males in the box. Even if you don't get the promo character - another female - you're still getting more ladies than gents. I didn't ask Fernanda Suarez, the artist, about this specific aspect when she signed my box, but I have to assume that getting a talented woman to create the artwork played a role. However it happened, it's awesome). While the subject matter is mostly standard fantasy tropes, it's all presented so cleanly that I can look past the fact that I've seen some of this before. Of course, I wouldn't bother writing about a game if the only thing worth mentioning is the pretty pictures. While the art got my attention, I stuck around for the game play.

Ashes is a fighting game. But, for me, Ashes doesn’t feel like a bunch of attacks. Sure, your whole objective is to fight and put damage on your opponent’s main character, but the way the mechanics play out make the game feel more like a delightful puzzle than two wizards swinging swords or lightning bolts or voodoo puppets.

I love card games because they often distill a set of possible actions into a finite set of choices. You can play this card or that card or you can trigger something on the board that you played earlier. Ashes fits right in there with some of my favorites because there are many possible options at the beginning of each round and you get to decide how you’re going to arrange them into the first, most important action and which one you’re going to try and the round end with (usually, but not always, it'll be an attack). Also, the way that players alternate turns means that you get to react immediately to whatever just happened. Is there an open space in your opponent’s battlefield? Guess it’s time to give her another Blood Puppet. Is an ally two points away from dying? Maybe I should use Blood Transfer and Living Doll to kill that creature. Or maybe I really need to make sure my opponent doesn’t have the dice to play another conjuration next turn, so I should use my Illusion die to remove a die from her active pool. Right from my first play, I could see that the decisions in this game were ones that were pulling me in interesting ways through the turn. Sure, my opponent is going to react and mess with things, but I had a road map. 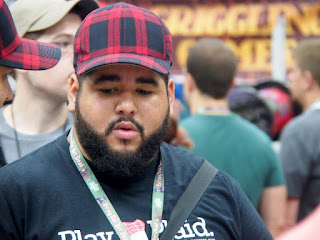 So, after a learn-to-play melee with five players (one who just read us the rulebook) on the Thursday of GenCon, I decided to try my hand in the first Ashes tournament on Sunday. I had a fun and successful game with the pre-built Jessa Na Ni deck on Saturday night, so I changed a few cards and went to bed. For the record, I took out one copy of the following: Redirect, Undying Heart, Cut The Strings, Blood Transfer and Final Cry. I put in Call Upon The Realms and Refresh from the Maroni deck, Small Sacrifice from Noah’s deck and two copies of Chant Of Revenge from Coal. I also played with six black dice and four pink ones after chatting with two friendly fellows at the tournament tables who suggested a 6/4 split before things got started.

My first opponent was Carol from Singapore. She played an Aradel deck with the addition of Iron Rhinos. As I was still learning exactly how to make Jessa’s Blood Puppets work, these Rhinos were difficult to deal with, but in the end they were enough. As we were playing, the game's designer, Issac Vega, came by to personally thank all of the 32 players in the tournament. He seemed as happy as we were that the game was off to such a roaring start. The game was single-elimination and so I moved into the second round. This time, I faced a Saria deck (piloted by a guy whose name I forgot to write down. My apologies). It was a beast of a game, and it went right down to the wire. The first Ashes tournament used 50-minute rounds (I think) and we were both still alive when time was called. I had my swag (a free Ashes playmat), and didn't know if I had it in me to win another three games just for the chance at the full set, so I let my opponent win.

This isn’t an empty boast. After we learned how the timed-out tiebreakers worked (if you were still playing when time was called, then whatever action was underway would be finished and then the winner was the player with the Phoenixborn with the most life left. If this was tied, then the winner was the one with the most cards left in his or her deck), it was clear that I would win. We were tied with one life left on our Phoenixborn, but my deck was taller at this point. Since it was the last day of GenCon and there were still sights to see, I reminded my opponent that he had a snake showing on his Charm die, and so instead of simply attacking my Phoenixborn as his last action, he could have pumped up his strength by one and kill me off. He sheepishly realized I was right, but this is the kind of puzzle that it takes time to learn with a new game like this. I let him take his move back, and he was happy to win. I was happy to take my free playmat and go about my day. We were all happy we got to play a great new card game, and in the weeks since GenCon, Ashes has become a fun side game to play after my regular LCG group's Netrunner games. I've taught it to a half-dozen people and they're mostly enjoyed it. From these experiences and from reading people's thoughts about the game on Board Game Geek, I don't think it's a stretch to say that Plaid Hat has another hit on their hands. Whenever you can get me to drop $50 when I certainly didn't mean to do so, then you know something's up. 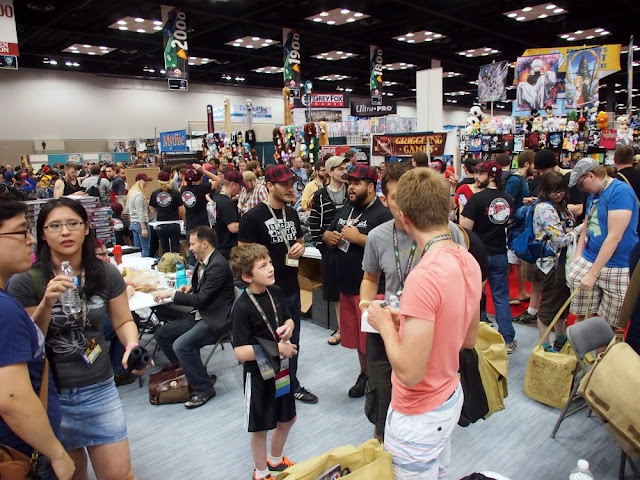