Raiders Of The North Sea Board Game Review: 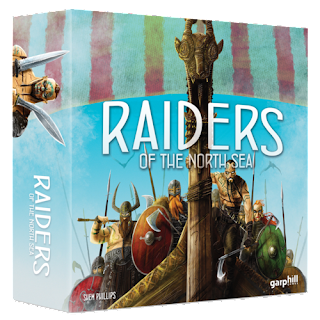 A slew of new viking-themed games have pillaged our wallets these past few years, allowing gamers to do everything from tracking actions on a rondel in "Vikings" to building wacky decks in "Vikings Gone Wild" to attacking (or defending) what became the British homeland in "878: Vikings – Invasions of England."

In 2017, "Raiders of the North Sea" put a different kind of worker-placement spin on the viking story and – after a successful Kickstarter project where it raised over $100,000 – the game found itself nominated for the prestigious Kennerspiel Des Jahres. It ended up losing to "Exit: The Game," but the committee did itself a service by picking this one as a finalist. I've played Raiders a half-dozen times now – with 2, 3, and 4 players – and can say that it's my new favorite worker-placement game. Just don't let the expansion bloat tempt you do go too far.

I'll try to keep the rules summary to a minimum, but some concept of what happens in the game is important before we continue. Everyone starts with one black worker and a hand of three crew cards (these can be randomly distributed, or drafted once players know how things work) and some money. At the beginning fo the game you can only take actions (called "work" in the game) on the action spaces south of the river on the nicely illustrated game board. Once you've collected enough items and hired enough crew members, you can get on your virtual ship and start attacking locations to the north (the "raid" action). The harbors are the easiest to attack, the fortresses the most difficult. But even if you don't have enough strength (made up of your crew, your level on the armor track, and, sometimes, the results of a die or two) to fully conquer a raiding space, you can still attack a difficult location to get the resources. You just won't get any points for that raid. Learning to identify the situations when this sort of move makes sense (as a defense against an opponent who's about to score a lot there, or to collect resources and then turn them in for one of the offering tiles) is a key to playing Raiders of the North Sea well. You keep on taking the "work" and "raid" actions as you build up your crew – sometimes watching them perish and go to Valhalla (where they stop being useful to your attacks but go gain you end game points as befitting a Viking warrior) – until one of the end-game triggers is reached. In my experience, this is usually when 5 of the 6 fortresses has been raided. Count up the points (available from a Feldian variety of choices, especially when using the expansions), and call it a good day.

On way that Raiders' differentiates itself from other worker-placement games is that it has three  kinds of workers. Black, grey, and white pawns function generally the same (put them onto or take them off or a space to do that action), but some spaces are off-limits to pawns of a certain color and some spaces function differently depending on the color of the pawn you use there. Black workers, for example, get three coins at the silversmith, while grey and white workers only get two. You can't access the grey or white pawns until someone accomplishes a raid, and even then the person making the raid can't claim ownership of that worker forever. Instead, she will place it somewhere on her next turn, perhaps allowing another player to remove it from the board as one of their actions. It will become theirs for a turn, and the cycle continues.

Two beautiful expansions – Hall of Heroes and Fields of Fame – both introduce new elements without in any way overwhelming the players with choices. In short, Hall of Heroes introduces mead and a way to get your crew drunk so they will fight better on a raid, as well as Quest tiles  I've played one game with both added in and that combination did feel a bit busy, but the players who had previously played with the base game and one expansion did not need much time to figure out how to integrate everything into one cohesive whole. Based on watching players who were trying the game itself for the first time wrapping their heads around the multiple paths to victory the expansions offer, it's fairly clear that the base game by itself is the right way to introduce people to the game. Maybe that's obvious, but it bears saying.

Raiders is a friendly worker-placement game because you can't ever get totally blocked from taking an action that you want or need to take. The "place a worker, take a worker" mechanic nicely changes the tension found in other worker placement games to something more like an annoyance. Since you have to place your in-hand worker onto an open space and then remove another worker from a different action space means that the order of your actions is determined by the board state when your turn rolls around, but you can still do anything you want. Raiding locations, on the other hand, can be blocked so speed is still an important factor in winning the game.

Well, most of the time. There is no rule that you can't have two of the same townsfolk in your crew, which might work fine in the base game, but I discovered in a game with three players and the Hall of Heroes expansion that some combinations can simply reach the win faster than others. In our example, one player had two Gatekeepers, which each allowed him to draw an extra card at the Gate House. So, instead of getting two cards a turn, he was getting four. This, in combination with the Quests that Hall of Heroes introduces meant that he was able to scoop up a seemingly endless pile of Quest tiles and thus ran away with the game. The rules might not need to be changed, but players should pay extra close attention to anyone who has a pair of crew members who offer the same benefit.

While the two expansions to add component for an additional player each. Beyond adding new color choices, I think these components are fairly useless. Raiders is already a bit slow and works much better with a group that is familiar with the rules and can take their turns quickly. I haven't played with more than four, but just imagining the wait for five people to take their turns before I get to do it again is exactly the invitation I need to play a different game. Perhaps another item in the North Sea saga, like Explorers of the North Sea or Shipwrights of the North Sea. Game author Shem Phillips has even released The North Sea Runesaga, which is a campaign that ties all three games together to crown the ultimate Viking chieftain. It's notable that this campaign is only for 2-4 players, a subtle way of reminding you that this is how things were originally designed.

That's one of Raiders Of The North Sea's strongest points, that everything feels intentional. The artwork on the expansion boards fit nicely next to the base game. The expansion mechanics feel like logical extensions to what came before. The promo cards I have for the game mesh nicely with the standard cards. But, if there's one aspect where Raiders of the North Sea deserves criticism, it is in its excessive number of limited-edition promotional cards. Currently, there are a half dozen or so out there, and some of them are outrageously expensive. I understand that some of these promo cards are intended to be fundraisers for the sites that are selling them (like the Rod & Pep promo for Watch It Played), but paying $20 plus shipping for a few cards just feels crazy.

Other than some expansion and promo craziness, Raiders Of The North Sea is an excellent addition to the viking board game category. Simple without being simplistic, clever without being overdone, and pretty without losing functionality.

This review originally appeared in The Spirit Of Games And Gamers, Summer 2018 issue.
Posted by Unknown at 7:57 PM

Email ThisBlogThis!Share to TwitterShare to FacebookShare to Pinterest
Labels: board game, board game review, raiders of the north sea, spirit magazine, vikings