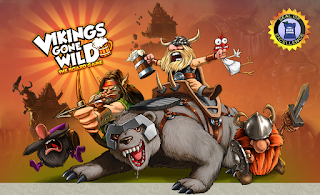 Dominion kicked off the deck-builder genre with a fire that still burns brightly in the hearts of game designers everywhere. This fire is so strong that there's a case to be made that a fair number of the deck-builders that have built on the basic Dominion framework should come with a special "Hey, you've played Dominion, right?" rulebook that only describes the gameplay differences between the current game and the granddaddy to get you up and running in a hurry.

For Vikings Gone Wild, that ruleset would say: this is Dominion with a lot of bling. You still draw five cards, you still have "blue" defense cards (but they don't work the same), and the buildings are like orange duration cards. Oh, and there's an Ascension/Star Realms-like row of cards called Odin's Path that flows throughout the game and there are two resource types, sort of like potions, but there from the beginning. You can also attack other players directly, but with minimal damage to them, and there's some incredibly bright cartoon vikings who love them some beer and gold.

As that intro might be give away, if you like Dominion you will at least get some enjoyment out of Vikings Gone Wild. I love Dominion, and have played it well over 200 times. I've played Vikings Gone Wild a half-dozen times now, and while I don't think I'll ever like it as much as the elegant original, I'm glad I bought it and have it as an alternative. Perhaps holding this new entry up to the first deck-builder isn't fair, but it is absolutely inevitable.

And that's sort of how I taught the game to the people I played with: it's Dominion, with some other stuff. What that other stuff was depended on if I was playing with any of the game's three official existing expansions or not. There's a fourth one, made up of the Kickstarter mini-expansion that came with the crowdfunded copies of the base game, that will become available again when an all-new, fifth expansion, hits Kickstarter in August.

Using only cards from the base game is a fine way to learn Vikings Gone Wild, but if you've played other deck building games, I imagine you'll get bored with this set up pretty quick. The base game has just enough type of building, defense, and unit cards to fill up the required slots (six, three, and three, respectively) that are needed in every game. The order of the Odin's Path cards, which change every turn, as well as the mission, end-game bonus scoring and divine flavor cards, will change from game to game, but even here, you'll see every kind of card after like two plays. In other words, you'll want the variety that the Guild Wars and It's A Kind Of Magic expansions offer. Ragnarok, maybe or maybe not. More on that below.

Let's get back to learning the game. A round begins with each player generating resources (beer and/or gold) from their production buildings and then drawing five cards. Then, each player plays their turn in order (start player shifts to the left each round). Importantly, you do not draw a fresh hand of cards when you're done playing. Not yet. This way, you can keep defense cards or bluff that you're doing so. You'll want to do this after the first few rounds because you can be attacked on other people's turns, and surprising them with a higher-than-expected defense can not only score you some points, but also seriously weaken their attack strategy. Because that's another way Vikings Gone Wild is different from Dominion: points are tracked on the board, not with green cards in your deck, and attacking is a great way to score a lot of points. Three successful attacks in one turn will get you a minimum of five points, and maybe eight or 10. In a 3-4 player game, the end is triggered when someone hits 30 points (40 in a two-player game), so multiple attacks in a turn hastens the end of the game in a big way. The good news for people who don't like PVP strikes is that the only thing that being attacked does is it can make you lose a resource. Your buildings still work just fine and you don't lose any points, so if you don't ever get any defense cards, you won't get hurt directly, but the game may be over before you have your engine up and running. 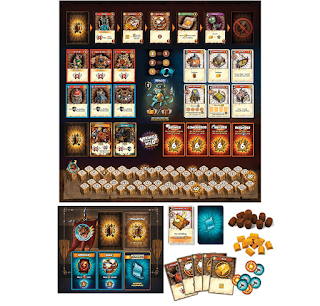 Other than attacking another player (which means playing unit cards with attack values equal or higher than the defense value printed on someone else's building), you can spend beer or gold cards (or produced goods) to buy better cards. Maybe you want stronger units to attack in a later turn, or maybe some better buildings to put in town so you can draw more cards at the start of your turn with a Tavern or hold some beer between turns with a Beer Container. You can also complete one mission a turn, and this it the most common way of scoring the first few points in the game, which allows you to (at five points) snag your first Divine Favor card. As the game goes on, your turns get more and more powerful (no surprise to Dominion players) until someone triggers the end. Instead of attacking with two strength, you can maybe get six or seven. Instead of buying one cheap card, you can get a medium-cost card and a big one, like a Pigator. If you're not using any expansion cards, you can't "trash" any cards, so you're stuck with your weak starter cards all game. This means that cards that let you draw more cards are vital to creating powerful turns. At the end of the game, four special scoring cards are evaluated, and these are important to keep in mind all game. The 24 points they offer can easily move the last place player into first. These end-of-game goals are drawn randomly each game, and this is the main variety that the base game offers if you don't have any expansions.

Oh, and about that Pigator. The theme from Vikings Gone Wild comes from an apparently popular smart phone app. I've never played that game, but my guess is that it's colorful and light and I assume the vikings go wild there, too.

The two standard expansions available now introduce more cards and card types, as well as tokens that can manipulate defense values or your units' strength. There are also 2 vs 2 team rules and, in the biggest twist to the standard game play, the smaller Ragnarok expansion removes the Odin's Path cards and replaces them with a never-ending stream of evil vikings from an Undead Army intent on attacking you. Now, instead of trying to score points, you're trying to defeat the minions and then a big boss. I really don't know if I played my first solo game right, because I couldn't find anything that said my city hall building couldn't be used to block attackers, and it seemed almost too easy when it did. The boss I faced was Dark Thor, and the objectives (end-of-game goals kind of like you use in the standard game, but focused on solo/cooperative play) were Reconstruction and No Shortage. These two certainly guided my strategy to focus on buildings and producing gold, which meant I had lots of gold, which in turn made buying Taverns easier, which dovetailed nicely with making enemies that much easier to defeat. As you would expect from a deck builder, drawing more cards at the start of your turn is, in fact, a helpful thing. I only bought one defense card (a single Cannon), which ended up not being a huge deal one way or the other. Maybe next time, I'll have to choose a tougher difficulty level, see how that plays out.

So, yeah, Vikings Gone Wild is a fun little game. It's not Dominion, but that might be a good thing for some people. In the long term, I'm pretty sure I'll prefer the clean elegance of the first deck-builder. But now and again, I'll be more than happy to go see what those Vikings are up to. Once reason I may not play it as much because the cards are unfortunately quite thin and, after just a few plays, are already showing signs of wear. I'm not sure this is a game I want to invest in sleeves for, but if I want to keep it in playable condition, I guess I'll have to. Sigh. This hobby sure is fun, but it can get expensive when you're playing with vikings.

*This article originally appeared in Counter magazine, issue 77, September 2017.
Posted by Unknown at 5:56 AM